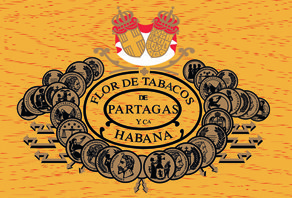 If there is one building in Havana that excites cigar lovers above all others it is the old Partagas factory. You can find it at No. 520 Industria Street, just behind the Capitol building, in the heart of the city.

The factory was opened in 1845 by Don Jaime Partagas and was still operational until just a few years ago. It is now closed with plans to transform it into a cigar museum well under way. The Partagas shop on the ground floor however, remains open and is well worth a visit.

A Partagas is immediately recognisable by its deep, earthy flavour. The character of its blend springs from a selection of filler and binder tobaccos grown in the Vuelta Abajo zone and chosen for their unmistakable richness of flavour and aroma.

Partagas come in a wide array of shapes and sizes notably the Lusitania and the 8-9-8, a cigar that is named after the way it is arranged in its box.

But perhaps the best known of all Partagas is the Serie D No.4, the robusto size that formed part of the legendary Partagas alphabet series that dates back to the 1930s. In 2005 a Pirámide, the Partagas Serie P No.2, was added to the range, which has fast become the cigar of choice amongst lovers of full-flavoured Havanas. In 2011 the Serie D No.5 and the heavy ring gauge Serie E No.2 extended the alphabet series once again. 2014 saw the most recent addition to the range when the diminutive D.6 was added.