The Cohiba Piramides Extra, one of Habanos most exclusive creations in 2012, is the luxury proposal of choice for those who want to wallow in this summer at full steam.

To a naked eye, this is no doubt a genuine summertime gift for all habano lovers, and especially those who love reveling in the peerless passion provided by Cohiba, the most prestigious habano brand, because the Cohiba Piramides Extra, exclusively unveiled during the 14th Habano Festival, is the first figurado that is now here to stay within the Cohiba brandâ€™s Linea Clasica niche.

The Piramides Extra SE accepts new safety measures based on a relief design on both the band and the tube: the relief shows off an Indian head on the lid (left), the inverse relief on the base (center) and the micro color code next to the barcode (right). And right beneath, the new band features a multitude of holographic elements, both visible and invisible, for heightened safety.

Pirámides Extra sticks to the Cohiba Linea Clasicaâ€™s blend, with a mild-to-strong taste. Itâ€™s complete rolled by hand with leaves hailing from the finest tobacco plantations of San Juan y Martinez (D.O.O.) and San Luis (D.O.O.), in the region of Vuelta Abajo (D.O.O.) in the province of Pinar del Río (D.O.O.) in Cuba.

Cohiba habanos are penciled in as exclusive cigars because, among other things, is the companyâ€™s only brand in which three of the four leaf types used in the rolling process â€“Seco, Ligero and Medio Tiempoâ€“ endure additional fermentation in casks â€“a very special process that renders in unmatched aroma and taste. 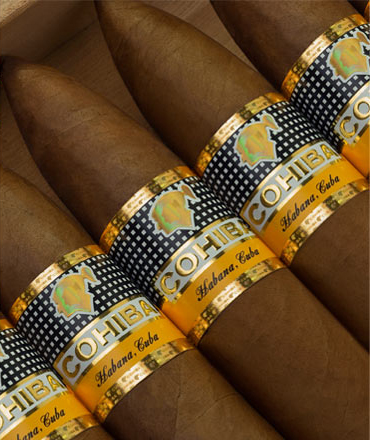 This foreground paves the way for the success of the new Pirámides Extra by Cohiba, which already made a big splash during this yearâ€™s 14th Habano Festival and has garnered tremendous acclaim in different presentations around the world.

Itâ€™s all about a habano of special taste and refined aroma, rolled by hand with long filler using leaves from the finest tobacco plantations in Vuelta Abajo and destined to be fully enjoyed as it clings to the brandâ€™s one-and-only taste. It comes in a fancy format which fits perfectly in special moments and great occasions.

The new band around the Cohiba Pirámides Extra also introduces visible and invisible measures to guarantee heightened safety for this unique product.

Coupled with his elegant and new band design, this habano has a magic touch of its own with its tube presentation â€“another addition to the Linea Clasica- in which the relief technique makes the brandâ€™s logo stands out as a token of vitality and strength. Whatâ€™s more, the new band has an ingrained security barcode to prevent fakery, quite a warranty of authenticity for all consumers.

Cohiba is Habanoâ€™s (D.O.O.) most prestigious brand. It was created in 1966 and at the onset it used to have very limited editions designed for heads of States, high-ranking delegations and world-class personalities. From 1982 on, the brand was launched publicly and since then it grabbed the preference of the most demanding smokers.

Its lines â€“Clásica, 1492, Maduro 5 and Cohiba Behike- and their respective vitolas are trendsetters in the realm of habanos. Moreover, this was the first brand ever to introduce a Reserve back in 2002 and a Grand Reserve in 2009, both rolled with leaves that have been previously aged for three and five years, respectively.